The car arrived on Tuesday, Aug 6th at 9 am.  It was delayed due to the long weekend and transportation snags to the island.

I met the shipping company, Penta, at the Totem Towing lot, where we transferred the 16 foot shipping crate from the flat deck to the Totem car hauler.  Everything went smoothly, and both parties were great to deal with.

Totem delivered the crate by gently sliding it off the flat deck.

Then, we got to crack it open.  This is the biggest Christmas present ever! ( I think they should paint the crate and put a bow on it).

Here is what was in there!

The next step was to unload the boxes, and then move the car into the garage. This took several hours in total. We slide the car onto moving dollys and pushed in inside. Then put it up on jack stands. 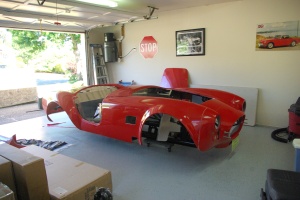 We opened all the boxes, some had one or two parts in them, some had dozens. That took us all afternoon and was really fun discovering all the different parts. The kids liked finding the steering wheel, the car keys and the chrome exhaust pipes.

The next step it to get the body off, which will be in the next day or so.

Many thanks to Al at Western Canada Cobras. I ordered the Factory Five kit through him since he is the Canadian Distributor of Factory Five cars. Not only did he answer my thousands of questions, he organized the paperwork and dealt with Canadian Customs and DOT, and arranges the shipping. Al made the whole process of getting the car from Factory Five to my door simple and easy.

The car has shipped from Factory Five in Wareham, Massachusetts.

It is coming on a truck, all packed in a very expensive shipping crate. Shipping cost a fortune…I could have probably driven to Massachusetts, and towed it home cheaper.  The shipping and the crate are a couple of the ‘additional’ costs incurred to get this
kit to Canada. (Shipping to Seattle is half price to what I paid, and no crate). 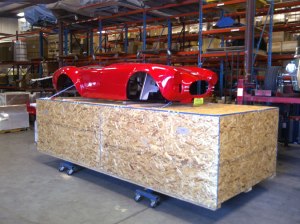 I am not sure what i will do with the crate. Depending on how well it is built, I may put it in the
yard and store the fiberglass body in it until it is ready to paint. If if looks well built I also may store
some of the parts in it. I am a bit concerned about moisture with the parts. Some parts may not matter, like the windshield etc but would hate to find out that was a bad idea later on.

The crate is shipped to a warehouse here in Victoria. Yup another ‘additional’ cost for us, I have to
get it from the warehouse to home. I could get a flat deck tow truck, or a flat bed uhaul or simliar.
Not sure, I am going to wait till it arrives and then figure out the lowest cost solution.

I really, really, really needed to clean out our garage anyway, I have been meaning to do it for years. This got me off my butt to get it cleaned up. Before: I emptied out ten years of crap and … Continue reading →

One of the steps to getting the car over the border is to apply to the Department of Transportation for approval to import the kit. There are rules about not bringing full kit cars over the border, so it is a bit of a process.

With help from Al at Western Canada Cobra’s, we successfully applied and received the Approval to Import letter.  Since I now have this letter, the car is basically pre-approved to cross the border so there should be no issues with customs. A part of the process is to identify all the parts  and provided the NAFTA numbers with them.  This makes it all duty free.

The entire process for the letter took just over four months.

So far, here is the build plan.  It is subject to change based on cost, day of the week, shiny objects I find online etc.

I ordered the kit with the following items as upgrades:

Factory Five Completion Kit: this is basically all the parts that need to be sourced from Canada due to import laws that you cant bring over the border. This includes steering, suspension, fuel, braking.

May 29th, 2013.  I placed my order for a Factory Five Roadster.  I have always wanted a Shelby Cobra so this is a huge huge day for me. It is called a replication kit car of a 1965 Ford Shelby … Continue reading →

Where are the parts coming from?