I spent the weekend on and off in the garage when I had time. Here is a summary of the things I got accomplished over the Christmas break. Its actually starting to look like a car!

Drive Shaft – installed the drive shaft to the T5 transmission and to the differential. The bolts were a challenge to get tightened to say the least. 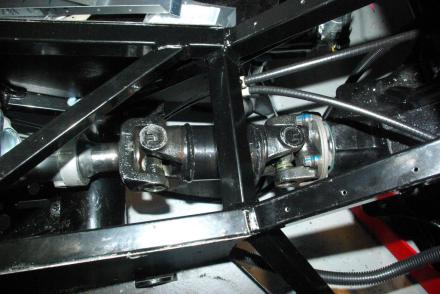 Headers – installed the headers, but have not torqued them yet, I want to make sure everything lines up and there is no engine mounting changes necessary before they get tightened. Eyeballing them, they look pretty close, but I doubt that is an accurate gauge. 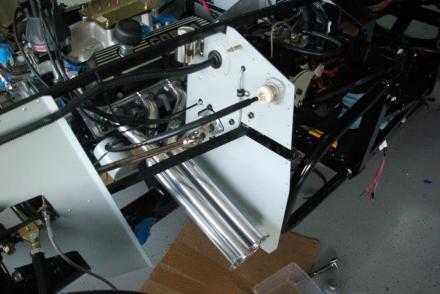 Brake mods – I was not happy how the front brake lines in the engine compartment were sitting, and especially the stainless steel soft lines to the calipers, so I modified how I mounted them, which changed the geometry and I am much happier with them. I still need to re-bleed them.

Console – after making the console, I added some dash mounting points which will stabilize the dash, which is just aluminum, so to me it feels pretty flimsy.

Dash coverings – I was not planning on worrying about this till later, but now that we are in full swing of getting things wired up, it is apparent that it would be much better to cover the dash and do the wiring properly once. I looked at carbon fiber coverings and had some samples sent it, I didn’t like them and the overall look, so decided to move to the more classic look of leather. I have been to several upholstery shops, and have narrowed it down to two options. The first is using a high quality vinyl. Vinyl gets such a bad wrap, but the quality now is fantastic. I found one that matches perfectly with the leather seats. It has the right pattern, sheen, color etc. It will hold up better under the sun than leather, BUT, I really think leather is the way to go. I have found a great leather sample, and fill know more in the next couple days on price, availability etc. I need to buy a half hide, so need to make sure there is enough material to do all the pieces I want to cover. This includes the dash, the center console and the rear glove box between the seats.

Stereos – I am going to put a stereo in the car, in the center console. I have been looking around and have narrowed it down. I am going to put in a Digital Media Center which is a mechless device, ie no cd player. There are two styles, a 1din or 2 din, meaning the height. I think I will end up with a 1din unit so it is not over powering in the cockpit, but the 2din are video capable, gps etc built in which is nice. All of them are Bluetooth, hands free driving etc.

Fan wiring – The fan is going to be wired so it comes on and off automatically, but also will have an override. I needed a special sensor for this, and had trouble finding one, but got one coming from Vancouver.

Wiper motor – for Christmas I got a small rubber matt that helps in the mounting of the wiper motor. Without it, I would have had to create something to work. I was looking at cutting a hockey puck or getting a rubber sole from a cobbler, but this arrived, so it was perfect. It allowed me to mount the wiper motor, but I am going to leave the rest of the wiper install for later since part of it includes having the body mounted.

All in all, over the Christmas break I had a tonne of time that I spent in the garage and I am really pleased with the progress. I know its an 80/20 concept, but things are moving along. There are a few things that are going to cause the build to slow down, which is ok. I want to make sure everything is done to the best of my ability before its on the road. I do hope to be go-carting by the early summer, which at this pace, should be an achievable goal.

Where are the parts coming from?